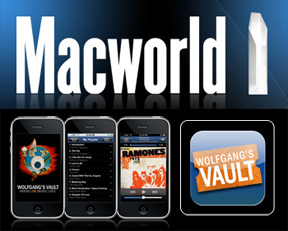 [1]It was quite a surprise, and serendipitous to say the least, that I was sitting in the middle of a local Philadelphia Cocoaheads group meeting [2] last night when I received an unexpected email from one of my favorite clients Wolfgangs Vault [3]. The email indicated that we had just won Macworld UK’s award for Best iPhone/iPod Touch Application of the Year 2009 [1] for our application Concert Vault [4]. It was serendipitous not only because we were in the Cocoaheads meeting discussing Mac and iPhone development at the time the email came through, but the fact that the manager of the group my very talented friend Andy Mroczkowski [5] was also the key Objective-C/Cocoa/Xcode developer on the project and did all the heavy lifting and coding, and Andy had literally just sat down after introducing the first speaker of the evening. I was delighted and a little distracted as I tried twittering and emailing Andy from the front row of the meeting where I was seated, to Andy sitting in the back. My apologies to Professor Randy Zauhar Phd [6], who gave an  excellent presentation on leveraging OpenCL [7] in Objective-C/Cocoa apps to accelerate the rendering and display of molecular simulations/interaction. I finally settled down and got into his presentation, but was definitely jazzed about hearing the news since neither of us even knew the application had even been nominated, let alone won. The other applications that had been nominated in the category made it even more exciting as we were up against:

All great applications from very cool companies and talented developers – so just finding out we had been nominated in the same category was pretty cool, but finding out we had won was totally unexpected. Thanks Macworld! I also have to give total props to all the super talented and friendly developers and staff at Wolfgangs Vault [3] – it was their vision in seeing the value of creating an iPhone app, as well as their amazing efforts and incredible content that made putting the Concert Vault app together possible. Thanks to Matt, Scott, Wade, Bill, Eric, Jeremy, and all the others who work behind the scenes at Wolfgangs Vault [3], Daytrotter [12] and Crawdaddy [13] – awesome job guys! Thanks for the opportunity!

We did have some good reviews of the app earlier in the year, one snippet from Rolling Stone magazine named Concert Vault one of the “Best Music Apps” which was really cool to find out. I was especially excited to hear we had won the Macworld UK award as this had been the first iPhone project that I worked on as I am primarily a Flash Platform developer. I am still teaching myself Objective C/Cocoa/Xcode, so I played a far lesser role than Andy did. I contributed some aspects of design, iconography, back end web services support, QA and a bit of project management, but securing Andy to work on the project is what I am most proud of as he is a truly talented developer and really knocked this one out the park. If you own or have seen a Neat scanner with the Mac version of NeatRecipts [14] you have seen some of Andy’s other software development efforts (along with some other friends of mine at Neat) Andy is also doing a fantastic job running the local Cocoaheads group, where I have been fortunate enough to make a number of additional friends and discover that we have a large and talented group of Apple Mac/iPhone developers in the local area. I was quite aware of all the local Flash and Flex talent in and around Philadelphia thanks to the Flash Platform User Group [15] I manage with my friend J Marziani [16], but I hadn’t really been exposed to all the other Mac native application developers in the area. Thanks to Andy and the group, I’ve found out that the following developers and their popular Mac/iPhone apps are right in our area:

These are just folks off the top of my head that are related to Mac development in the area, there are way more talented people and companies in the tech industry covering a wide range of disciplines all over the area (I should start making another big list for a future post). I want to make sure and give a shout-out to Alex Hillman and Geoff DiMasi of Indy Hall [38] and all the folks who call Indy Hall home, as they have been very generous and supportive in allowing both the Cocoaheads group [2] and our Flash Platform User Group [15] to meet at Indy Hall [38], including run classes and sponsor our events – thanks guys!

I’d like to wrap this post up by noting that I keep seeing more and more talented Flash developers taking on and delivering some really amazing Objective-C/Cocoa applications both for the desktop and iPhone/iPod touch devices. Apple has done a really great job with the app store and not only do developers clearly see a straightforward path to monetizing their efforts but so do managers, owners, investors, etc. As much as I am enjoying learning Objective-C/Cocoa, and can see all the potential reasons why Apple wouldn’t even consider allowing a Flash player of some sort on the iPhone. I am still a Flash developer at heart, and I am really rooting for Apple and Adobe to come to an agreement and get a Flash player or some solution for allowing Flash content to be deployed to iPhones/iPod Touch devices. I just got my 32GB iPhone 3GS today and it is super snappy fast with its 600Mhz ARM-A8 processor. Considering that Adobe and others have made announcements about the Open Screen project [39] agreements with Intel and other hardware manufacturers to get Flash Player 10 working on ARM based devices [40] that utilize ARMv6, ARMv7, and ARM11 chips [41] and the  Cortex-A (ARM Cortex-A8) [42] found in the iPhone 3GS  (some of those running at only 400Mhz) – and to accelerate performance through custom ASICs and GPU chips from the likes of Nvidia [43], as well as deliver Flash to set top boxes and other consumer devices [44], not to mention some [45] special [46] sessions [47] at Adobe MAX 2009 [48] later this year. I have to believe and have faith that at this point, it is literally down to Apple and Adobe coming to some mutual agreements as opposed to any true technical hurdles. So guys, here’s to working it out, and making even more opportunities for success for all of us developers and consumers trying to raise the bar.