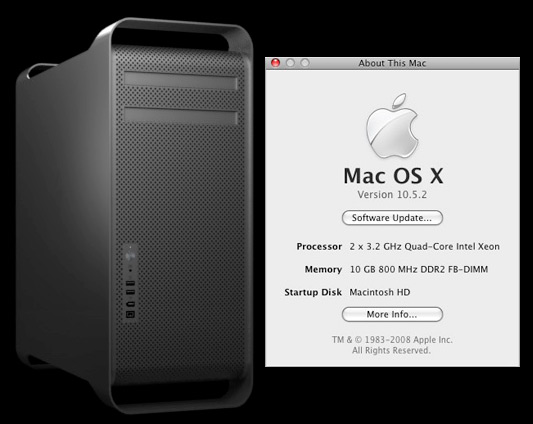 I just had to post this as I had been waiting and waiting to get a new desktop machine for some time. I’ve relied primarily on laptops for the last several years, but I’ve tried to cut back my travel time as much as possible to spend more time with my family. I’ve got another child due, (this time a girl!) in April, so I’ll be home even more for the next few months. Given that and other reasons, I felt it was time to invest in a nicer desktop machine to boost my productivity. It was even clearer to me since I am doing a ton of video related work lately, and the fact that Apple still hasn’t released a new MacBook Pro, plus I’ve already got a great brand new MacBook, and an older Powerbook for when I do need to travel, so the tower machine/Mac Pro was a no brainer decision. It just arrived Monday and I finished configuring it, installing apps and adding another 8GB of RAM today from OWC [1]. It is by far the fastest, most solid computer I have ever owned, and I have quite a collection of them. It is one of the new Early 2008 Mac Pro towers. I ordered it the day they were announced, back in mid January, but it didn’t ship till this week because I custom configured it with the dual Quad Core 3.2 GHz Xeon processors (8 cores total) and an Nvidia 8800GT graphics card along with a number of other options. I can say that it was totally worth the wait, this thing just flies. I’ve got four 1TB Seagate drives ready to get popped in next for some additional storage which should speed it up even more. Lets just say I am quite pleased with the purchase.

So other than some community events related to local Philly events and our User Group meetings, and now this entry, I haven’t posted much at all since October of last year. I’ve just found myself utterly immersed in work, local community events and family time so the blog just hasn’t been a priority. I have been using twitter quite a bit – http://twitter.com/rhall/ [2] if you want to follow me. I’m very excited to post about some of the projects I have been working on, and I’ll do so over the next few weeks as they all finish “baking”.

One project I can mention briefly that is still in somewhat stealth mode, but is now popping up everywhere is Redlasso – http://www.redlasso.com/ [3] I’ll post more about it another time, just wanted to put up a link for now since its not open to the general public, but if you are interested in find out more, go to the site and sign up.