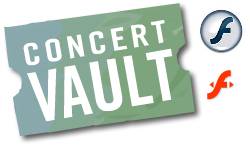 Its been over two weeks now since I got back from Adobe MAX 2006, but I’ve been so busy with a couple projects, I haven’t had time to post anything at all. Wrapped one project up that was really fun to work on – Wolfgangs Vault – http://concerts.wolfgangsvault.com/ [1] Wolfgangs Vault sells all kinds of concert/music related items. From their main site, “Wolfgang’s Vault is the world’s most exceptional collection of poster art, vintage t-shirts, concert photos, concert tickets and other rock music memorabilia. The Vault’s holdings feature the complete archives of legendary rock impresario Bill Graham, whose headliners included Johnny Cash, Lynyrd Skynyrd, Janis Joplin, Aerosmith, Jefferson Airplane, AC/DC and Phish. Here, you’ll find rock posters, concert photos, remarkably preserved vintage t-shirts and more from over 17,000 concerts worldwide.”

The part of the project I worked on was a new feature for the site: Flash based players for streaming MP3’s in radio and concert format of the many thousands of hours of live, rare, concert recordings they have in their archive. They describe it in much more detail here [2] – but a brief snippet: “Concert Vault is the world’s greatest collection of vintage concert recordings. In 2003, Wolfgang’s Vault acquired master recordings from the archives of Bill Graham Presents. These live concerts were recorded at legendary venues like the Fillmore East and Winterland between 1965 and the late 1980s. In early 2006, we augmented the Graham archives by acquiring the archives of the King Biscuit Flower Hour, the nationally famous syndicated rock radio broadcasts of live concerts from the 1970s and ’80s. We also added the Silver Eagle Cross Country archive of country music concerts in 2006, and we haven’t stopped there.”

So, the two players I put together pull down streams to the user via Flash Communications Server. One is called the Concert Vault Player – it allows you to listen to whole concerts, individual tracks, see info about the concerts, link to more concerts by that artist, see related memorabilia, add to your favorites, assign ratings, tell a friend, etc. The second one is the Vault Radio player, which loads in a huge 180+ track list mix of specially selected tracks from the archives which you listen to in radio format. The track listing is updated regularly by the Wolfgangs Vault staff – and they are great at putting together really eclectic mixes from the wide range of artists they have in their archives. The Vault Radio player will even remember what track you left off on intelligently so you can pick up where you left off if you have to quit and come back. Lots of little subtle things we put into the players, like remembering your volume setting and sharing it between the two players, intelligent selection of streams based on bandwidth detection, integration of Express Install, auto-renegotiation of streams in case of drops or low-bandwidth. Lot of new features planned for the next couple iterations as well, I’d definitely keep an eye on what Wolfgangs Vault is up to this year. There should be a very interesting interview with their CEO Bill Sagan [3] in an upcoming issue of Rolling Stone.

It was really fun to work on this project, everyone at Wolfgangs Vault is top notch and a joy to work with. I also enjoyed working on this project because of all the great music I got to listen to while working. If you get a minute head on over to Wolfgangs Vault – http://concerts.wolfgangsvault.com/ [1], create a free account, and check things out. If you have any feedback or comments, about the music, the players, the site, things you would like to see, etc. – check out the built in feedback link in the players or jump right to it here: http://forums.wolfgangsvault.com/forums/thread/116.aspx [4]

Here are several links to overviews on concerts that I really enjoyed and added to my favorites as I worked:

Select any track from the page to launch the Concert Player and begin that track, or just hit play to launch and start from the beginning.

Special thanks to Rob Sandie of Viddler [12] for bringing me in on this project, Matt Lundberg and the rest of the staff at Wolfgangs Vault [13], Charley Thomas & David Park at Vitalstream [14], and Steve Wolkoff [15] & Chris Hock at Adobe [16].